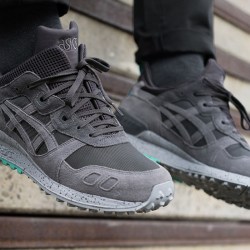 Asics are set to unveil a new design this October with hopes of it being “their most utilitarian trainer yet.”

The Asics Gel-Lyte III MT will be made up of signature design features from previous models, specifically the split tongue of the Gel Lyte III’s, the mono sock of the Gel Lyte V’s and the heel clip of the Asics Respector, alongside new additions such as a high rise on the midsole and rugged outsole. Together these aspects help to create an interesting new silhouette, perfectly equipped to tackle the harsher conditions that the winter brings.

The shoes initial release will see two distinct colour ways, both of which will be available this October and will retail for £120 at select global Asics retailers. 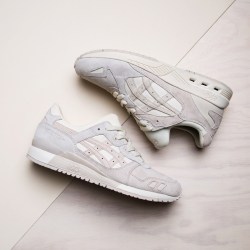 Asics have unveiled a new seasonal pack just in time for the summer, featuring two high profile runners - the recently reissued GT-Cool Xpress and the ever popular Gel-Lyte III silhouette.

The GT-cool express has been the brands shoes of the moment, having been re-introduced to the world back in January it has been subject to several strong releases with OG colour re-works and the hugely popular 'Mint' release, as well a two high profile collaborative releases with Sneakersnstuff & KITH NYC. This season, alongside the Gel-Lyte III, the classic runner gets reworked with dusty shades of grey, white, yellow and pink for a subtle, premium finish, worthy of a Ronnie Fieg collab. Each shoe has been constructed from a mixture of suede and leather on the uppers, with low-key debossed branding on the heel and embroidered branding on the tongue, all over which sits on top of a cushioning Gel sole unit.

The Asics Gel-Lyte III & GT-Cool Xpress "Blush" pack will be available from the 11th of June at select Asics Tiger retailers.

Asics and monkey time have come together on a collaborative rework of the coveted Gel Lyte V silhouette, drawing inspiration from the textures and layers of desert sand dunes.

Having already worked with Asics on the unique 'Lights and Shadows' rendition of the Gel Lyte V in the summer of last year, the latest effort from United Arrows sister brand perfectly executes another well considered concept, breathing new life in to the classic running silhouette.

Drawing inspiration from the natural hues of the desert, the runners pigskin nubuck upper has been dressed in an all over light sand, from the perforated toe box through to the textured heel. Tonal detailing such as the branding on the side panels and the complimenting lycra sock liner resemble the various layers of the dunes, with the speckled midsole reminiscent of the grains of sand in a sandstorm, all of which are subtle enough to maintain the premium feel of the silhouette. The shoe is competed with hairy suede panelling on the heel, waxed cotton laces and hardwearing gum outsole to tie the shoes look together.

Having already released exclusively through monkey time back in December to a solid reception, The Asics x monkey time Gel Lyte V "Sand Layer" is now set to release on Saturday the 30th of January at Hanon, Footpatrol, DSM and END. 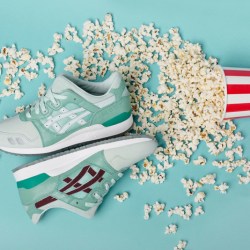 Asics continue to celebrate the 25th anniversary of their coveted Gel-Lyte III design by teaming up with another notable name from around the world, as they present the Asics x Highs and Lows “Silverscreen” release.

The shoes design draws inspiration from The Astor, and iconic cinema house located in Mount Hawley of HAL’s native Perth. First opened in 1919, The Astor remains one of the cultural and artistic hubs of the city, and a premiere destination for independent cinema, various global music events and stage shows. The Gel-Lyte III silhouette is reworked with a premium suede, leather and nubuck mix, decorated in soft mint pastel and a contrasting deep red on the Asics side panel branding, inspired by the decor of the theatre.  Additional features include crisp white laces and midsole, 3M accents throughout, and an embossed Mayan motif on the heel detailing. The “Silverscreen” reference is completed with a silent film countdown print on the pairs custom innersoles which sit alongside a soft leather lining. 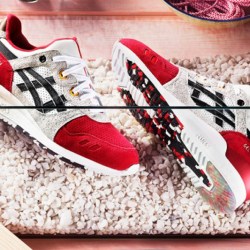 Continuing the Gel Lyte III’s 25th anniversary celebrations, Asics link up once again with German sneaker store AFEW to present a refined version of their 1-of-1 handmade edition’s from back in 2012, which went by the same name of “Koi Klub”.

In paying homage to Japanese culture and lifestyle, in which high importance is placed on quality craftsmanship, this is also true celebration of sneaker culture, with every detail of the design through to the application and finish meticulously thought out. The colour way of white, red and black references the iconic Koi fish which has strong ties to Japanese culture and traditions. The shoes upper is constructed from a nappy suede with off white colouring on the mid-foot and red on the perforated toe box and heel, finished with hits of black on the Asics branding. The plush upper sits on top of a crisp white midsole and a ‘Koi Camo’ outsole, while additional details include wooden lace eyelets, brown leather accents and embossed AFEW branding on the heel.

Looking closer at the shoe, you also small touches that really complete the look, with two heel patches on each shoe, one reading “AFEW” and the other “家族” which translates as ‘family’. Finally as a nod to the pairs efforts back in 2012, the sock liners feature pictures from the first Japan Day event while the other shows the process of hand making the original pair.

The Asics x AFEW Gel Lyte III ‘Koi Klub’ launches on Saturday the 30th of May (tomorrow) online at Hanon and in store at END. 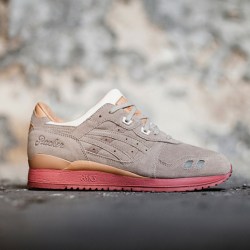 As part of the Gel Lyte III’s 25th anniversary celebrations, Asics Tiger link up with Packer to offer their creative take on the iconic runner in the “Dirty Buck” pack.

The New Jersey boutiques iteration of the Gel Lyte III follows Mita Sneakers of Tokyo’s ‘Far East’ effort that dropped earlier this year, Packer’s take is slightly more toned down version of the silhouette. Taking inspiration from the classic dress shoe which holds the same name ‘Dirty Buck’, the rework arrives in a premium taupe coloured suede construction on the upper, with white leather hits on the tongue and a kind of toast-like colouring on the lining and heel cup. Additional features include the embossed Packer logo on the heel and tonal laces, all of which sits on top of a dusty brick midsole that is reminiscent of the original ‘Dirty Buck’ shoe.

The Asics Tiger x Packer ‘Dirty Buck’ will be available at the following stockists from February the 28th; 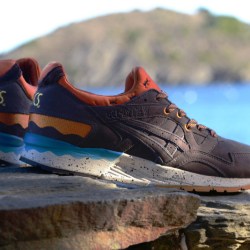 Entitled ‘SurrEDalist’, the collaboration celebrates the stores 10th yeah anniversary, which just so happens to fall on the 25th anniversary of fellow Catalan Dali’s death. The Gel Lyte V provides the canvas, as the colours from the original paintings iconic skyline are transferred to the shoes exterior, with added touches in the embroidered fly detailing giving a nod to Dali’s use of insects throughout his work.

The shoes brown upper arrives in a mix of soft suede leather, premium nubuck and textured velour panelling, sitting on top of a speckled bright white midsole. Hints of blue feature on the sole and in the branding, while pops of orange are found on the heel and sock liner that is constructed from a goat leather paying homage to 2015 – the year of the goat.

It’s another great collaboration from the Barcelona based store who have put a lot of time into the construction, from the use of considered materials to the tasteful references of the original painting.

The LimitEdition x ASICS ‘SurrEDalist’ Gel Lyte V will be dropping on the 13th of December at the LimitEDitions store and will be available in the UK from the 20th of December at selected retailers.