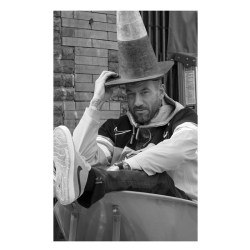 In the future, it will be difficult to discuss 2016’s contributions to skateboarding lore without mentioning Brian Anderson. You’re probably familiar with the public revelation regarding his sexuality. His openness to discuss the matter was previously unheard of in the world of professional skateboarding. Regardless of the ensuing waves of attention, Brian has been focusing on designing a range of garments incorporating his artwork, as well as still finding the time to skate. I was given a brief window to chat to Brian, who was enthusiastic about a new capsule collection he’s created for Nike’s ‘SPRING 17’ range, as well as discussing his wedding, his attitude towards his profile on social media and Keith from LES… 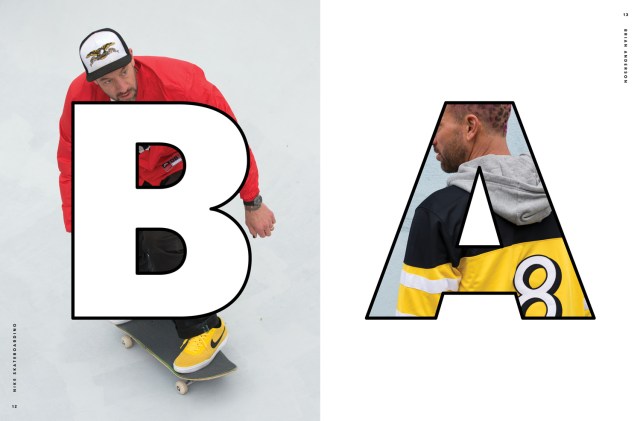 Alright, How are you?

Ahh, I’m so jealous.. Anyway, let’s start with the big news. Congratulations on your recent marriage! Was it a big event, or just friends and family?

Oh thank you, thank you. We had talked about it a lot over the last year and it was kind of a combination of the election, like who knows what’s going to happen? Also in case one of us gets sick. If one of us has to go to hospital, you know, and you’re not a relative, sometimes this causes problems in America. We’re just so happy and content in our relationship and we were like ‘Oh lets do it, just incase anything changes’, that type of thing, you know? Like obviously we did it because we’re in love and we’re happy, but for some legal reasons too, it’s just smart.

Of course. We’re a little unstable over here at the moment as well..

Yeah, people are pretty freaked out. 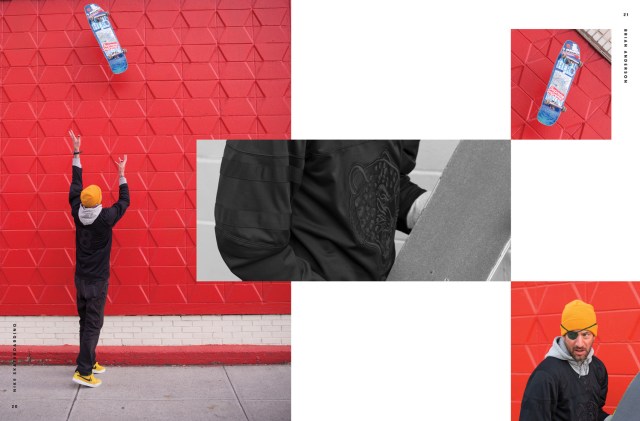 You’ve designed for a lot of the brands you’ve represented in the past and now Nike is no exception. Want to fill us in on your recent project? What are the chances of us seeing the return of the Project BA? I know some die-hard fans.

I was really happy to have done the ‘Spring 17’ line that’s about to come out. It’s been really well received with everybody at Nike on campus and hopefully the capsule does really well with the public! I think everyone’s happy, so we’ll see what happens in the future. I’m pretty excited and I think everyone I work with is pretty excited too! We’ll keep talking and chipping away and I’ll keep drawing and making sketches.. we’ll see what happens. (laughs) It’s cool man. I’m happy. I ride all different shoes and I like to try all the shoes in the line. I love Corey’s shoe and there’s slip-ons now.  I’m quite content with the way things are.

So what does your line feature?

I just started with the sketch of a cheetah head, over a year ago and sent it to Jesse Leyva (Creative director for Nike SB), and I was like, ‘this could be a great hockey jersey’. Actually I didn’t just draw the head! I drew the whole Jersey. I wore them quite a bit, well here and there, and they often have huge-sized shoulders for hockey pads and all that stuff. So we started with that jersey and then Jesse said we should do a shoe with it. So we picked the Bruin Hyperfeel. I really dig that shoe, so we’re doing the jersey and then the yellow shoe with the black swoosh to match. There’s also a coaches jacket, a hoodie and being that I’m with Nike vision, sunglasses. We’re doing a pair of sunglasses to match the collection. I’d say, cheetah.. leopard? It matches the cat print! It was really fun to work on it and then when we had to shoot it, we did a little zine in New York. A couple of guys on the team came out from California and Scuba (Steve) helped and all these great people got involved. So it was fun! It was a really fun project for sure.

I’m a broad dude so I’m going to be hyped on the hockey jersey..

Oh nice. Well here’s the secret, you gotta wear a black t-shirt under the yellow, so that you don’t have a load of neck sticking out. I’m gonna’ instagram it soon and give some instructions too.

Sort of a ‘how-to-wear’ the collection?

Yeah maybe a little bit of a front tuck, and a bit of a back flap? (laughs) 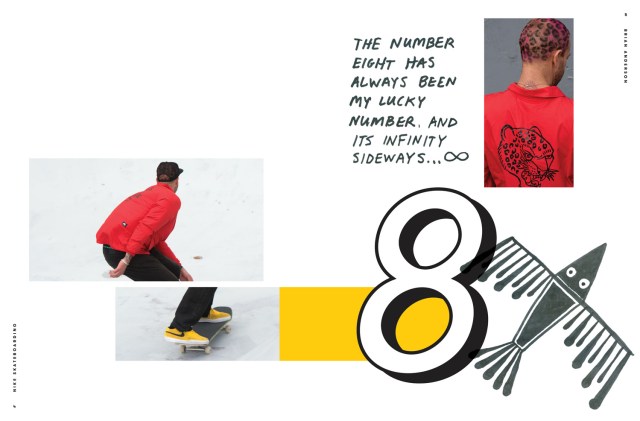 I had a little snoop on your Instagram before chatting to you. Just to do a bit of research on your recent happenings, but I realised that there wasn’t really much there! Did you wipe your feed when you got married, like starting fresh?

I guess honestly, sometimes I feel a little self conscious. Like I feel, to be totally honest with you, Instagram is bragging. You’re bragging. So sometimes I’ll post something because I want all my friends to see it and everyone to see it and then a week later I’ll take it down, not ‘cause I think it was stupid. Like everyone gets to see it, but if somebody new comes to my page, they’re not thinking ‘woah this dude’s got 400 selfies’. It’s like I’m constantly remixing it and I like that about it. Yeah, I thought it would be neat to completely delete everything. That’s why I started with a picture of my father, then one of my family and I just thought why not man? I’m gonna’ do this every year. It makes you savour your pictures more and makes you think differently. You don’t just post random stuff and it becomes like, a little sketch book. It just changes it. So that’s my plan, to just delete it every January 1st. Like screw it. It’ll make you want to accomplish more things. 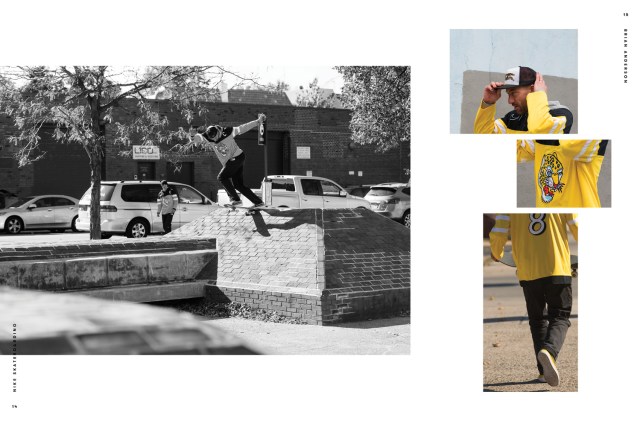 Ahh we’re almost out of time, but I thought I’d ask about life in New York. You’re pretty heavily integrated in the scene now and over here everyones’ eyes are on the East Coast. Who are you skating with and what are you working towards? Is there anyone that you’ve seen skate that catches your eye? Any up and coming LES locals we should be looking out for?

There’s this dude Keith. I don’t know his last name. Regular footed dude, wears real baggy pants like a lot of the kids are doing, but he rocks it really well. He’s got like a dangling earing, but yeah Keith, he’s sick man. Lacey Baker just moved here so that’s my new skate buddy! She’s awesome so I skate with her a lot. I skate with Ben Kadow and once in a while I’ll skate with Alex Olson. Gonna’ try film with Bill Strobeck in the Spring. It’s just started snowing here, so the streets get all slushy. In general I’ve got a good routine! I go into the city, I go to Labour, I can leave a couple boards there and go skate LES. Sometimes I go skate with Gonz you know, Mark (Gonzales) lives not too far downtown and we’re in good contact. Once in a while Mark will hit me up and that’s always a great staple. Mostly Lacey right now, she’s my new best friend and I’m really, really psyched that she lives here. We’re tight!

Stoked, well cheers for chatting to me,

Thanks so much for your time Conor.

The Brian Anderson Capsule Collection will be available at www.nike.com and select Nike SB retailers from the 19th of January. 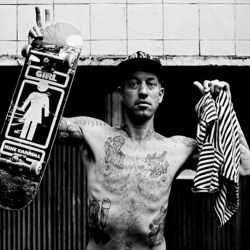 In what is perhaps the most important skate documentary of this year, Vice Sport’s Giovanni Reda sits down with one of skateboardings most worshipped figures – Brian Anderson, on what it’s like being a gay professional skateboarder. The video speaks to Brian alongside some of his closest friends and fellow pro’s on his experience growing up skateboarding, living with his secret, the response from his peers and why he chose to come out now.

It’s an essential bit of viewing that you can check out in full above.