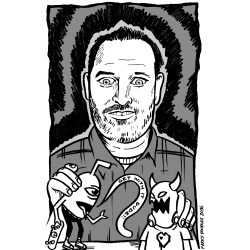 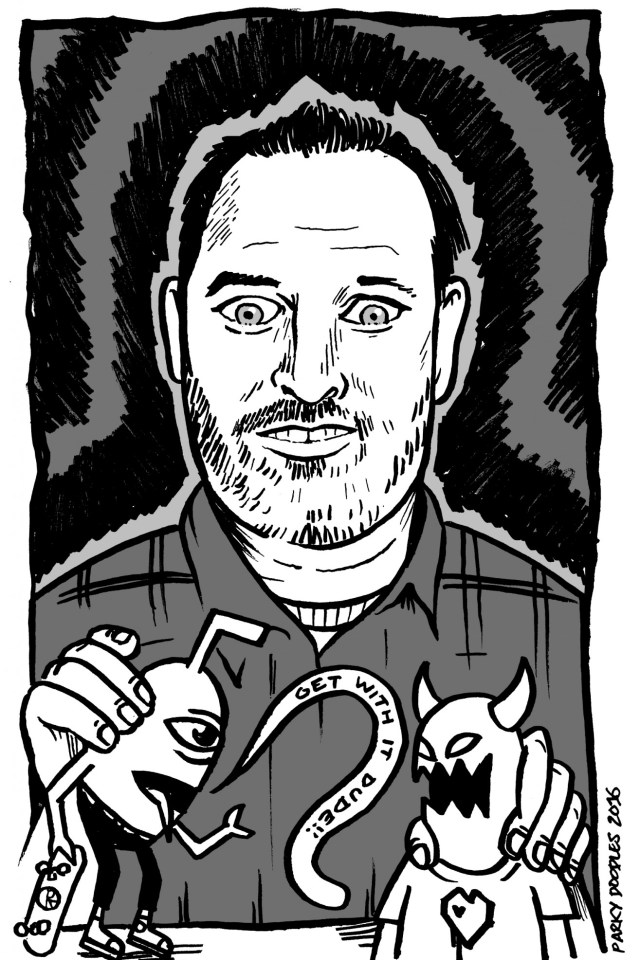 Does a good skate company require longevity for it to be great or can it simply be a symbol of its time? Like some great and valued skate companies and skaters have, much like bands and musicians from yesteryear? We’ve seen a great rise in the number of small/independently owned and operated skate companies in the last 5 years or so, which is a good thing I think, even for the side of pushing out dominant characters. In many aspects someone, or in this case a company, sticking around too long, having too much of a dominant force in the market, has to get stale at some point? Or can companies span and change like Alien, akin to David Bowie’s or Madonna’s careers, who learned to adapt to their environment, whilst also maintaining an autonomous and self -identifying image: retained throughout their output across decades. It does seem, that like those famed musicians, it really takes a strong individual to be able to adapt and learn in sync with the current times.

The infamous Steve Rocco enjoyed a short oligopoly in the skate industry: with World Industries, Blind, 101 and other companies. This inadvertently led to the formation of Girl and later Chocolate by unhappy pros, which although having a longer and more honest presence in the scene have been seemingly drifting away from popular acclaim recently; suffering a number of defects from their camp along the way, in a similar fashion to their now former bosses. Crailtap legend Brian Anderson went off to found 3D with Habitat defect Austyn Gillette and briefly the other Girl defect Alex Olson (who further defected to create his own brand(s) Call me 917/Bianca Chandon). Other long term pro’s Guy Mariano and Eric Koston have also left the Girl camp. Mentioning Alien earlier as an adaptable and long-lasting company it’s obviously important to refer to AVE and Jason Dill’s departure to form Fucking Awesome, with Kevin Terpening and then going on to make offshoot Hockey. Later other Alien riders Jake Johnson, Gilbert Crockett and Tyler Bledsoe with ex-team manager Chad Bowers formed Mother now renamed Quasi. It’s inevitable that people move on from jobs and companies and take new paths and choices in their career, but when it comes to skateboarding, the rising trend of new/independent brands must be a signifier of the importance for skaters to be able to run their own thing and have control over their aesthetic. Even if a brand evolves with the changing times and keeps itself relevant, with seemingly no good reason for people to leave, why do they still do it? For obvious and various numbers of reasons, mainly having total control and power over your own style (from video parts to products). When talking about himself and Mike V being on New Deal and then going on to form TV Ed Templeton said ’’Let’s start our own company, we’ll make all the money and it’ll be great’ and I bought into that and said yeah let’s do it.’ However after starting TV with funding and distribution from Brad Dorfman at Plan B. ‘Dorfman was over-controlling, trying to make us do stuff…we weren’t happy there so we leave him to go with this guy Dean.” Templeton later gets essentially kicked off his own company after Mike V doesn’t pay Ed one month, because he needed the money for himself. After being ‘out of a job’ as a pro skater, for over six months Ed decides to go back to Dorfman and start Toy Machine. The very least you can surmise from all this is that Ed Templeton is a born survivor.

In any creative persons output, if they have any longevity, the best will never go stagnant. There will always be new trends and fashions that anything creative, such as music or skating, will be continually going through: by forming new trends or referencing old ones. Cults: skateboarding has seen its fair share of them, which can be categorised as something simple and small as wearing a chain wallet back in the early 90’s because Matt Hensley was the shit, or in more recent years wearing Dickies and converse due to the Polar team. Palace, Polar and Magenta have shown the dominance of identification (and even pigeon-holing) oneself to an aesthetic people want to replicate. Every town and every skate park will always have at least one skater who would be labelled ‘trendy’ Polar board, Cons shoes, Dickies, wallies, slappies, no-complies etc. 20 years earlier it would be a Menace fan or Alien fan, wearing and doing the same things as their idolised pro’s. It’s fair to say these new companies are creating or cottoning onto ‘trends’ because they know there’s a definite ‘life-time’ that they’ll be able to continue doing more of the same. However some people find a ‘trend’ or style they like and stick with it, which is admirable, not every skater is as fickle as the next. Generational change: skateboarding is one of those things that some would argue suffers from waves of public interest and participation. It’s not unfair to say that people of the same generation, are influenced by each other enough that the group consciousness of what is cool or not, goes pretty unanimously. As soon as that group who’ve been skating and progressing at various rates, but for similar times, get better at skating, they’ll naturally move away from it onto something new (whether that be a new path in skating or outside of it). The only way for companies to survive, is to give the public what they want: whether you decide that or not is down to you. The great Chad Muska said in Ed Templeton’s Epicly Later’d about Toy Machine ’it’s like a cat that has nine lives…different generations of Toy Machine…how Ed has been able to build all these teams and stay culturally relevant all these years…not a lot of bands have done that.’ Which is completely true, Toy has suffered many losses in terms of riders over the years but it hasn’t deterred the company from continuing to be itself and be successful.

It’s a shame we have companies like Element who stick around when the cool ones die. Although they do manage to provide a platform for a decent wage to guys who deserve it: Brandon Westgate and Ray Barbee for example. The cool ones tend to be the independent ones (rather than a corporate one like Element), who sometimes through no fault of their own cease to exist. Then again there have been some come-backs like Stereo and Plan B, who rose from the ashes of their success and influence in the 90’s for a return in the early 00’s. Although it may be cruel to say this, as some of my favourite skaters have ridden for Stereo, the company now seems to be a bit washed up – it may have tarnished its legacy by returning (and essentially giving us penny boards too). Sometimes it’s good to let something good live out its life naturally, there would be less chance of travesties like Blueprint 2.0 happening if it did. However the latest reincarnation of Alien seems to have a pretty solid team choice, the artistic direction seems to be the same too. There will always be a fascination with the new, if there was nothing different from the norm being created, the world would be stagnant. We will always need something new to focus on and become obsessed with, whether it’s a new band or TV show, it seems that the public and it’s fashions tend to move quickly, the modern world doesn’t seem too happy with settling for classics any longer, Opera and Ballet are too pompous for most people to become introduced to it, skateboarding is a product of modern (20th Century) consumerism. The consumer is never satisfied; they will go on consuming and being unsettled and displaced until their death. The lifetime of a skater will go through far more pairs of shoes than your average person, and your professional skater will go through far more than that. Our greatest stars, idols and creators are some of the greatest consumers of materials around, they’re never seemingly settled and the hyper-progression of trends our culture goes through compared to others should maybe be an indicator of skateboarding’s future. Everything has a lifetime and so should skateboarding. Will football forever be popular with the masses? Jousting used to be pretty up there and now is a defunct relic of centuries past. In the end every company will die (imagine if/when independent trucks will go) and we need to accept it. There will always be new faces on the scene and old ones bowing out, hopefully with some grace, but in my mind the ones who stick around and adapt are the ones really worth paying attention to.