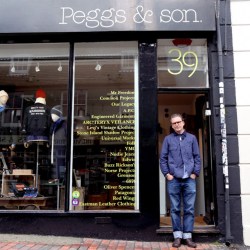 From humble beginnings and minimal experience, Peggs and Son has grown to become one of the most highly regarded menswear stores in the UK. Situated on Brighton’s Duke Street, one of the cities most historic areas, the stores rustic feel sits perfectly with a portfolio of carefully selected, premium brands from around the world.

Peggs were the first store to really give us a chance when we started out last year and were willing to trust us to shoot some of their amazing product. Needless to say we owe a lot to the store and upon the release of our new site we really wanted to put together a feature that took a closer look at one of our favourite stores and a true Brighton mainstay.

Behind the stores success is a small team of committed individuals, all of which have an eye for style and are truly passionate about the product they sell. At the heart of it all is the stores owner Ian Peggs. Not one to sit back and bark out orders, Ian is largely involved in the day-to-day running of the store and his dedication and hard work has seen the store grow into what it is today. We were lucky enough to chat to the man himself about the stores history, the product and what the future holds for Peggs and Son… 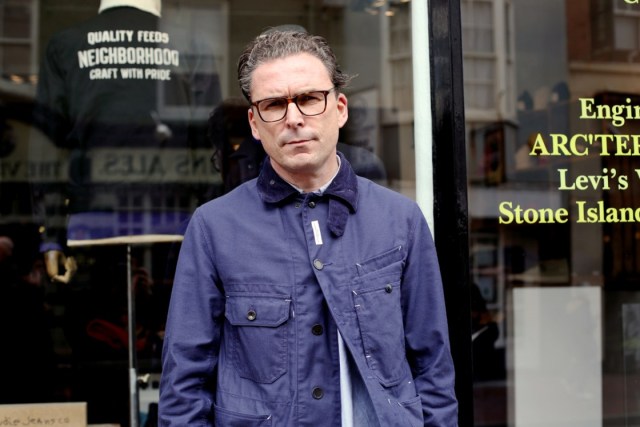 Hey Ian, how’s it going? Could you tell us a bit about yourself and what you do?

I’m a middle aged father of three who strives to be middle class despite the large working class chip on my shoulder.

Having started Peggs back in 2000, originally located on he outskirts of Brighton’s North Laine, you have been on a bit of a journey to get to where you are today. Could you tell us a bit on the history of the store and how you ended up here on Duke Street?

Our current store is the third site we have occupied in the last 14 years and by far the biggest (though still relatively small), and nicest store we have had.

I opened in the North Laine as it was simply the cheapest place to open in Central Brighton at the time. As I remember, in the original store on Sydney Street, the entire shop fit from rails to mannequins, cash desk to coat hangers and the paint on the walls came to around £600.

We were there for seven years and it was a great spot to spend the day and watch the people of Brighton but I knew I would have to move the store as the scope of product we could sell was limited.We managed to get hold of a small store in the centre of town, close to our current location and though small, it opened us up to a much wider audience. Although we had traded online before then, we launched the Peggs & son website which again began bringing us a lot more attention.

In 2010 we moved to our current location and its allowed us to develop into a much more interesting store with a wider range of product.

Was it always going to be Brighton as the location for Peggs and Son?

It just happened to be the place that I ended up. I grew up in an industrial Midlands city and got out at the first opportunity. After a short stint in Manchester and a few years in London I moved to Brighton at the age of 25. I liked it enough to stay.

Prior to opening the store, did you have any industry experience?

None at all. I met a fella who had a small store here and he had a fantastic eye for product. We talked about doing something together but it never came together. But I had found something that I wanted to do.

What have been the main barriers to overcome when developing the store? Did you encounter any start up problems?

Back 15 years ago it was a different game. You couldn’t go on the internet and look at what other people were doing or head to a trade show and just write a list of orders and I often wonder if it was better that way! You had to have a real sense of what you were into and what you thought was strong product – and you had to get out there and find the people and make it happen. 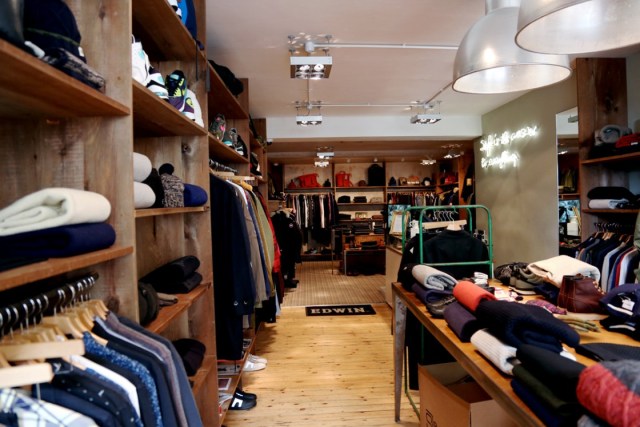 Has the general aesthetic of the store (the product, visual merchandising etc) been consistent since the start of Peggs or has this been developed over time?

It’s changed a lot I’m sure! No doubt I have sold some stuff in the past that I wouldn’t look at nowadays but there has been a lot of consistencies. For example we have sold YMC every season for 14 years – I’m pretty sure there is no other store that can say that. Decent Japanese denim has always featured one way or another- though back 12-14 years ago we couldn’t give dry selvedge Edwin jeans away!

We’ve noticed a few additions to the stores design. Talk us through the current layout…

We are always looking to make the store as good as it can be so sometimes we switch things up a little- new lighting, new arrangements etc. And often it’s simply a matter of space- as we have grown so have the amount of label we carry and it all has to go somewhere. We don’t buy product just to show online- it has to fit into the store and its style.

How would you describe your target consumer?

Our customers are a real mixed bag. Young men who know exactly what they want – like some Norse basics and technical outerwear or guys who are detail and denim obsessed. Some want to know which loom the jersey has been woven on or check a rare piece we have brought over from Japan that they haven’t been able to see in the flesh before. Also, and most importantly in many ways, regular guys of all ages right up to chaps in their 60’s who trust our choices and who want to wear interesting clothes of quality and detail that does the required job.

One thing that has stood out in particular to us and I’m sure to others that have visited the store, is the knowledge of the staff. As a higher end menswear store, is this something you place a high importance on?

It’s massively important in my opinion. For a start there is nothing worse than walking into a place and being looked up and down by the sales staff and considered for your worthiness. I hope we never ever do that.

As for product knowledge it’s vital as not everybody is an expert on the obscurities of clothing and we genuinely like what we do- it’s a pleasure to tell people why a denim is so good or why a shirting fabric will wash well or to perhaps adjust your sizing on a handmade shoe and of course, it’s what helps us stand apart from a high street experience. 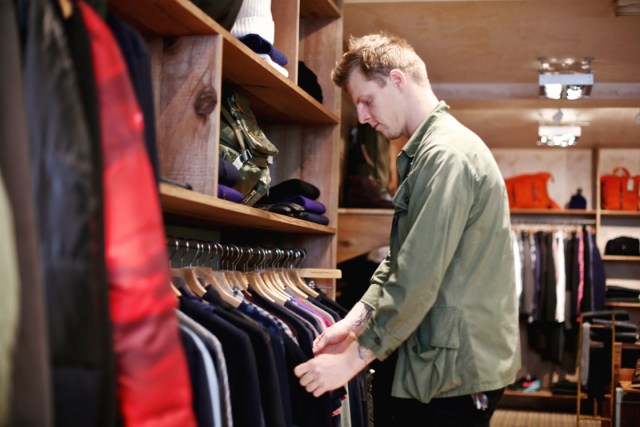 What do you look for in a brand when buying for the store? What sways your decisions?

It’s a great question and one that I probably haven’t got a decent answer for. Some stuff is just obvious- the first time I saw Norse Projects many years ago it was clearly quality – from the styling and use of fabrics and wearability. Labels like Arc’teryx Veilance offer such a superior product that is head and shoulders above its competitors.

Sometimes you just look at stuff for the first time and you get a tingle along your spine and you know it’s a bit ace.Equally I think of the philosopher Nietzsche’s aphorism ‘you can tell more about a man by what he doesn’t say than what he does’ – I think you can tell a lot about a store by what they don’t sell as much as what they do.

Coming into the store recently we have noticed a few Japanese brands taking center stage such as Neighborhood, Or Slow and Nanamica for example. What is it about Japanese design that stands out to you?

Buying amazing Japanese brands is the easiest thing in the world (assuming they will sell to you!) as they are mostly just incredibly well considered. Be it the fabrics or production techniques or the historical referencing used, a lot get it just right.

We buy things we like to wear and I’m never prescriptive about any particular style. I’m as at home in a Red Wing boot as I am in a Nike or Common Project trainer. We have to be careful not to become a sneaker store so we keep them to a relative minimum but it’s great to have limited Quick Strike Nike releases alongside, say, a traditional handmade derby from Tricker’s of Northampton. 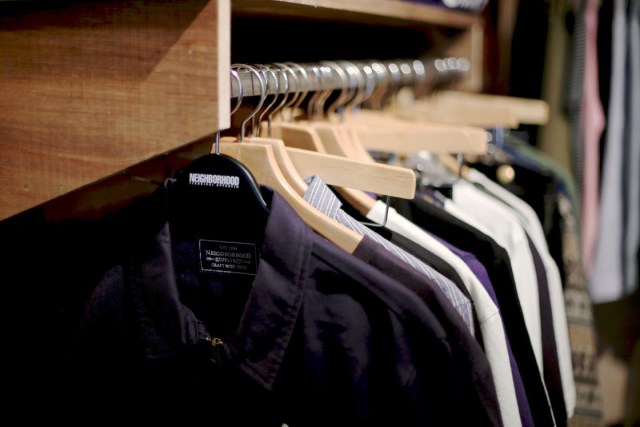 The past few years have seen an increased focus for Peggs and Son online. With the new website and an active presence on social media, how has this enabled you to develop the store?

We work super hard with our online store but are still tiny compared to some other independents that you might consider similar to us. It’s certainly helped us reach a much wider audience and enabled us to sell some product that we might not have been able to consider before.

Have you found that the importance placed on online retailing has affected brick and mortar stores?

I think this is actually a really hard game to be in anyway so I’m not really sure – the UK has certainly seen a number of stores disappear in recent times both good and not so good. It’s certainly feasible that that the ever present rush to discount goods in order to increase online business has destabilised bricks and mortar stores and this is something that in general is bad for the industry- it’s an ever decreasing circle that has the potential to drown the more interesting stores (and therefore the smaller labels they sell) and leave only the homogenised superstores.

Have you ever given any thought towards putting out product of your own? Is this something we could see from you in the future? A collab maybe?

I’m pretty sure everybody is bored with the rash of collaborations that have happened recently, I know I am. There are definitely some people I would love to work with if an opportunity arises and a few ideas I have tinkered with but the time has never been right.

What do you hold has the key elements towards the success of Peggs and Son?

Being able to cling on through the hard times! And an apparent inability to be too commercial – people have learned to trust our choices over the years!

What does the future hold for Peggs and Son?

Just keep keeping on, being as good a store as we can be – keep introducing new product and labels and doing what we love. If that involves the odd pint, all the better. 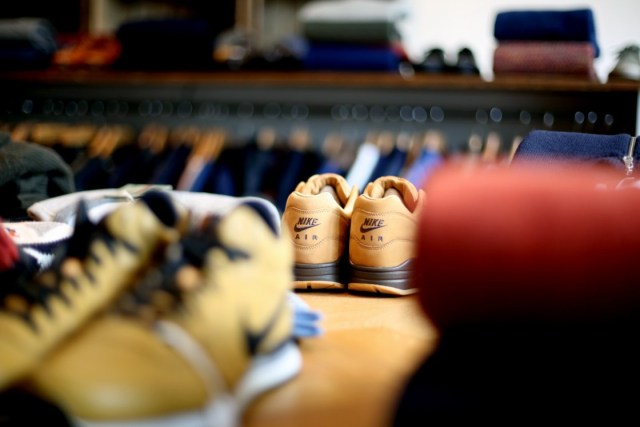 Your favorite apparel piece of the season?

The Acronym J43-GT. Be a ninja in your bedroom.

The Common Projects suede chukka is a great shoe and the parchment 70’s Chuck Taylor Converse is hard to beat but the old man in me keeps coming back to the Tricker’s Bourton in Expresso with a Dainite sole unit. If it’s good enough for Prince Charles etc etc

So many good young brands out there right now but Matthew Miller is up there. Anyone who can drink me under the table is all right with me.

We would like to thank Ian for his time! For more information on the store or to shop the collections, head over to www.peggsandson.com 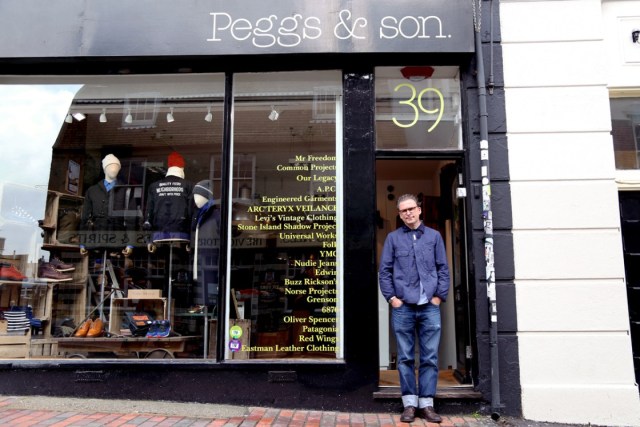