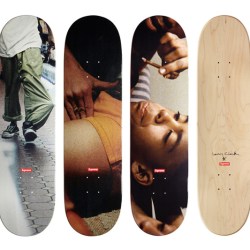 To celebrate the 20th anniversary of one of the most controversial yet defining cult classics of our time, New York giants Supreme team up with acclaimed director Larry Clark for the “KIDS 20th Anniversary capsule collection

Released back in 1995, KIDS  has continued to remain relevant up to present day with the issues it addresses, and is considered a raw representation of the youth culture in New York during the early 90’s. The film was born from Larry Clarks involvement in documenting the NY skate scene of the time and through this connection he met the films writer, Harmony Korine and the movies star, Leo Fitzpatrick. The famous Supreme box logo features prominently throughout the film on the back of some of the cast members which include the likes of Chloë Sevigny, Jeff Pang, Rosario Dawson and Javier Nunez, as well as Supreme team riders at the time – Justin Pierce and Harold Hunter.

With both parties connection and long standing friendship, it’s a fitting tribute to the film 20 years on. The capsule collection consists of long and short sleeved graphic tees, hoodies and a deck series, featuring some of the most iconic stills, as well as the final quote from the film – ““Jesus Christ. What happened?” as a back print on.

The Supreme x Larry Clark “KIDS 20th Anniversary” Capsule Collection goes on sale tomorrow (Thursday the 21st of May) at the brands London location and on online.