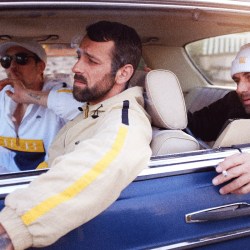 French skate-wear staple Hélas are back this season with a brand new capsule collection dubbed “THE CASUAL SUSPECTS”. Showcasing the release, the brand have also dropped some new visuals featuring Lucas Puig and the Hélas crew kicking it back and cruising around in their vintage Merc, while donning the latest pieces from the range.

The latest capsule release doesn't stray too far from previous offerings, focusing on a subtle colour palette of beige, olive, bright white and pops of yellow and navy, we see a variety of classic sportswear staples, light outerwear and of course a strong headwear range. Stand out's include the 'Gang' two-piece tracksuit in beige and white options, and the fleece-lined 'Bookmaker' jacket. 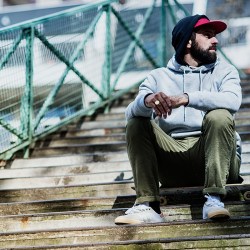 Following up on his Away Day's opener, adidas Skateboarding have released a new signature shoe from Lucas Puig dubbed the 'Lucas Premiere ADV'.

As one of the most celebrated street skaters of all time, it's no surprise that the shoe has been highly anticipated and that hype has been helped along by a solid part from adidas' first full length video. Working closely with Puig, adidas Skateboarding have produced a shoe that compliments his style both on and off the board, as well as being able to deal with the rigours of skating street and protect your feet at the same time.

The low profile silhouette has been constructed with durability and comfort in mind, with a synthetic woven mix on the tongue and back panels, reinforced with a perforated suede at the front of the shoe, which itself is backed up with an adiTUFF reinforced toe for extra protection and abrasion resistance. The upper is dressed in a white and soft grey colour way, accented with hits of salmon pink on the tongue and heel, all of which sits on top of a gum sole unit.

The adidas Skateboarding Lucas Premiere ADV will be dropping in stores on July the 1st. Head to www.adidas.co.uk for more

Check out our interview with Lucas Puig from last year HERE 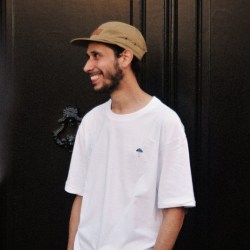 Hélas Caps continue to develop their range as they present a selection of summer ready pieces in the “Paris Sportif” Collection.

Following their high fashion inspired “Polo Club” collection released earlier this year, Hélas take more of a casual approach in design for their latest release referencing French sportswear pieces,  as well as expanding their cut and sew offering with the introduction of new button-down shirting and comfortable jogger style chino pants. The brands famous umbrella logo features prominently throughout on a range of graphic based tees, embroidered headwear that includes caps and bucket hats, sports socks and a selection of beach ready board shorts.

The Hélas Caps SS15 “Paris Sportif” Collection is available on the brands web store now at helascaps.com and should be arriving with UK stockists such as Flatspot. shortly. If you haven’t already, be sure to check out our interview with Hélas Caps founder Lucas Puig HERE. 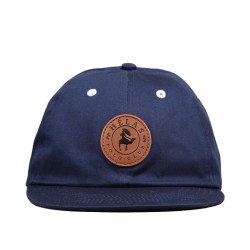 Toulouse based Hélas Caps present their first release of the year with a concise collection entitled the Polo Club Capsule.

Hélas continue to draw influence from other notable designer labels as they rework their distinctive Umbrella motif, adding a guy riding a camel, which serves as the the logo for the release. Sticking to a strict colour palette of navy blue and white, the capsule consists of two 100% cotton t-shirts that adorns the polo club logo on the chest and as a back print, with embroidered label detailing on the hem. The stand out French designed Jacket is constructed from a soft polyester with a tonal mesh lining for warmth and extra comfort, with nice touches in the custom umbrella zip pulls and elasticated ribbed collar and cuffs. No Hélas collection would be complete without a strong headwear selection, and this release is no exception with a 6 panel cap and 6 panel bucket hat, each of which feature a brown embossed leather logo badge. 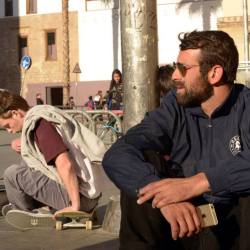 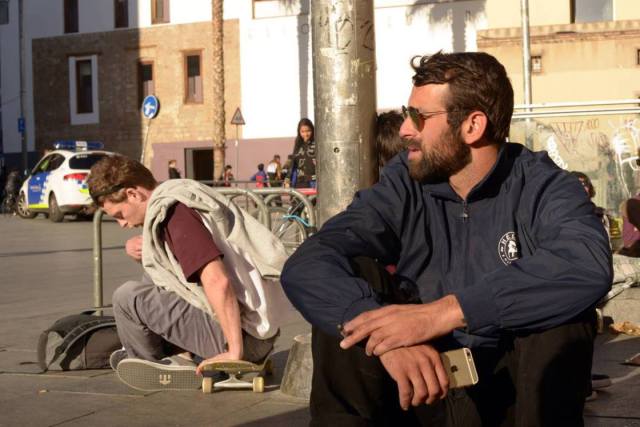 Despite what might seem like yesterday to many of us, that miracle primo slide we saw Lucas Puig do in Lakai’s Fully Flared happened near enough 8 years ago now. Since then he’s come a long way and is now without a doubt a globally recognised professional skateboarder. As a certified favourite of ours we jumped at the opportunity to chat with him over email about his ever-growing company, Hélas.

Quartersnacks called you “the skater of the decade (thus far)”. What did you think when you saw that?

I was hyped! It’s cool to see something like that knowing I’ll never be skater of the year.

What was it like growing up skating in France? Do you think It’s influenced the way you skate now?

It was cool as I’m sure it would be growing up skating anywhere. I’ve always been inspired by my local French homies JB Gillet and JJ Rousseau, two French legends.

There’s a big list of household names riding with you for adidas. What’s it like skating with newer members, Nakel (Smith), Tyshawn (Jones) and Miles (Silvas)?

It’s always good to skate with newcomers. They show up with their fresh legs so it’s motivating for me. 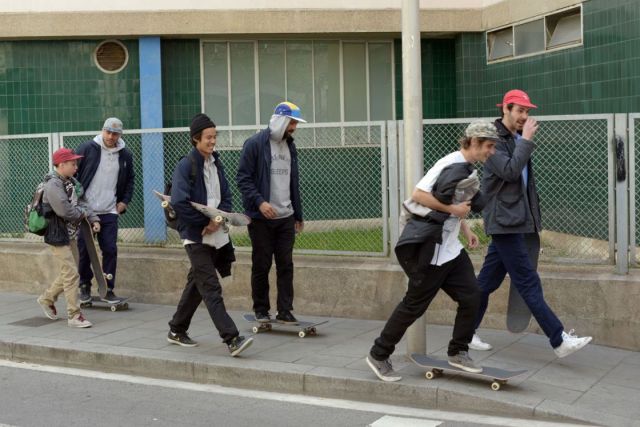 Cliche and Adidas have worked with Hélas in the past. How has the support you’ve received from them helped you develop the brand?

All my sponsors had been following Hélas, then they offered to collaborate with us spontaneously. It was really exciting for me to feel that backing from everyone. It’s definitely helped us to spread the brand overseas as well as in Europe.

Are you working on any new collaborations at the moment?

Skate companies from all over the world are getting a lot more global recognition these days, especially in Europe. Do you think that has helped Hélas get to where it is now?

For sure, European brands are way more welcome overseas than they used to be. All the Euro brands are doing it properly with a sort of different approach compared to the US scene, which is good.

What was the inspiration behind starting Hélas as a hat company?

We’d always been big fans of 5 panels and at time it was still kind of rare to get our hands on one. Me and my homies thought it was time to dive in!

Could you tell us a bit about the name Hélas and the inspiration behind the umbrella logo?

Hélas means unfortunately. We like to leave the name and the logo to the imagination of the people that check us out!

You’ve drawn inspiration from designer brands in past, notably in the “GUCCIT” collection. Do you think that designer brands particularly influence you and your products at Helas?

GUCCIT for Good Shit haha! Of course, we’re definitely influenced by some minimalist “classy” brands that we love to wear.

What can you tell us about the latest Hélas collection?

Its better than the previous one but a lot more wack than the one coming after this! 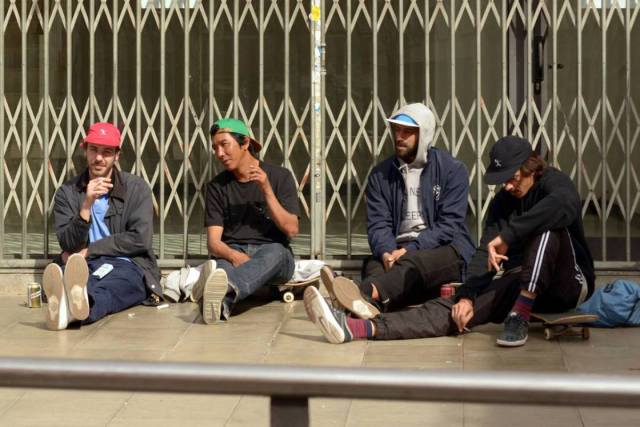 There’s definitely a strong sense of brotherhood and camaraderie in the videos you’re putting out. We’ve seen plenty of clips in the Hélas mixtapes of friends and family from around the world showing their support for the brand. Is this sense of brotherhood part of the vision at Hélas.

CAMARADERIE, FEELING, BROTHERHOOD, those words define the Hélas spirit for sure! No pressure, we skate together and we like to push our underdogs!

How’re things going with the video?

Real good, my partner Stephen is killing it behind the lens. We’re trying to meet more and more with the boys to film and push it. People we might not get to skate with as often are also filming in their own time as well which is exciting.

Is the majority of the video being filmed in Europe?

Most of it will be in Europe and some in China where Stephen is also based.

Should we expect full parts?

Full parts and some chaos for sure!

Be sure to head to helascaps.com for more information or to shop the collection. You can also pick up the latest from Hélas at flatspot.com. 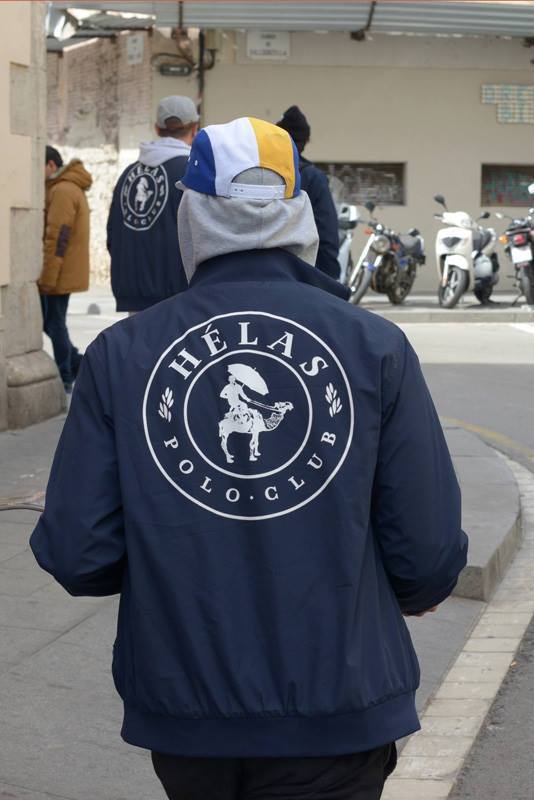 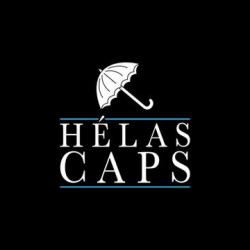 French based skate brand Hélas Caps present their latest Mixtape comprised of several instagram videos from some of the top names in world skateboarding.

Enjoy the video below and for more information on the brand or to shop their latest collection head over to helascaps.com