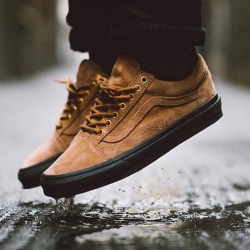 Following on from the pairs collaborative Old Skool CA Fall Pack, size? and Vans California come together once again this season to give the shoe more of a winter appropriate rework.

Presented in three tonal colour options of tan, olive green and a vibrant red, the shoes upper has been constructed from a plush suede with tonal lacing and side stripe for a clean finish. All three pairs sit on a contrasting black waffle sole unit, with additional features including brass eyelets and subtle tonal stitching throughout the entirety of the upper.

The size? x Vans California Old Skool CA Winter Pack will be arriving at all size? locations and their online store from the 11th of December. 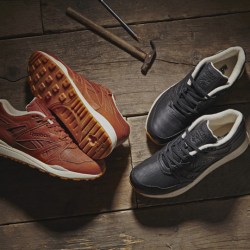 Master collaborators size? team up once again with Reebok, this time to ‘Re-Upholster’ the classic Ventilator running silhouette.

The retro runner, originally released back in 1990, maintains its performance enhancing Hexalite technology for optimal comfort and IMEVA shock absorbing midsole that flexes upon impact in it’s latest rework. The shoe does however ditch its traditional mesh and suede construction, trading it in for a far more luxurious look and feel. Undergoing its most drastic rework to date, a rich supple leather construction is applied to the upper, with laser perforated detailing on the toe-box and side panelling. The premium look is completed with a soft off-white lining and matching midsole, contrasted with a gum sole. The shoes arrive in tonal black and tonal brown colour options. 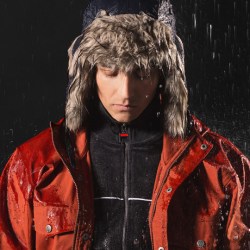 Size? present this showery lookbook for Winter 2014, highlighting the unity between form and functionality amongst their key styles.

The footwear/streetwear giants have played a huge role in shaping the UK streetwear scene since 2000 and have more recently been contributing towards streetwear patterns worldwide, as the brand continues to build its reputation across the globe.

Their Winter visuals showcase a carefully selected assortment of pieces that effortlessly fuse style with performance. Size? draw influence from bygone era’s that have had significant impact on the style of today, stating that ‘good practical product will never go out of fashion’. Globally renowned brands including Stussy, Fjallraven, Nike, Carhartt and Converse feature in a lookbook that focuses on technical outerwear, pullovers and hooded sweaters, as well as headwear and winterised footwear options.

Head over to www.size.co.uk to shop the looks now. 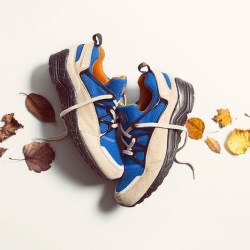 The last few months have seen a wave of notable collaborative releases from UK retailer size? and their latest effort, reworking the Air Huarache Light, is one of the strongest so far.

Drawing inspiration from the natural beauty of Moab, Utah and the colours of the horizon, the shoes colour way replicates the hues of blue from the skyline as they meet with the burnt sand to create an intersecting orange burst. The colour treatment was originally found on the iconic ACG Mowabb release which brought the ‘Huarache to the mountains’, and the same shoe was also the pioneer of the now popular speckled midsole that can also be found on this model.

The latest iteration of the shoe features mesh on the upper which works with the neoprene sock liner for added comfort and stability, as well as suede panelling on the mudguard for durability. Additional features include the black and white speckled midsole, branding on the heel and heel tab, with the huarache logo on the tongue.

The Air Huarache Light has seen a bit of a resurgence of late, most notably as the focus of Footpatrols ‘Concrete’ release and the OG ‘Ultramarine’. In my opinion it’s one of the most understated silhouettes and when it’s done well, it can make for a great shoe, and this Autumnal rendition is an example of that.

The size? x Nike AIr Huarache Light will be available at size? from the 31st of October. 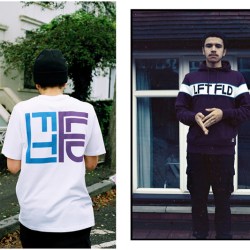 LFT FLD is the brainchild of two of the UK’s key players in the skate/streetwear scene and this Autumn/Winter they release their inaugural collection full of 90′s inspired silhouettes, with a contemporary twist.

Recent years have seen increased interest in british streetwear, sneaker culture and our skate scene, and for good reason. With the huge hype around American brands its easy to forget sometimes that the UK holds some of the worlds most sought after stores and is home to some of the most unique independent brands of the moment. UK streetwear is definitely on the up and Gareth Skewis (Palace and Slam City Skates) and Paul Ruffles (size? and Footpatrol) have been a huge part of the UK movement. Their experience and skill has been channelled into this impressive collaborative effort – LFT FLD.

Taking a retrospective approach whilst applying refined, considered construction, LFT FLD present a solid selection of sportswear inspired apparel. Performance outerwear options in the contemporary neoprene jacket and reversible hoodie are the stand out pieces, while staple athletic silhouettes dominate the release, bearing heavy graphic designs from none other than Fergus Purcell – the man behind the Palace logo and many other big name designs, has now turned his attention to the graphic identity and branding for LFT FLD.

The LFT FLD first release is available now at size? and will be available from other select retailers shortly. 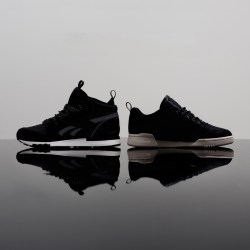 Following a string of notable collaborative releases, master collaborators – size? link up with Reebok once again to give their renditions of the GL 6000 and Workout Plus in their ‘Black Winter’ Pack.

As the name suggests, the two silhouettes are reworked using an all black colour treatment and constructed out of winter ready materials. The Workout WW arrives with a heavy duty black waxed leather upper for durability against the harsh conditions, whilst the GL 6000 features a robust black ballistic mesh and suede mix sitting on top of a contrasting white midsole. Both shapes make use of the popular 3M reflective material on the details and branding, whilst each shape comes complete with additional teal coloured lace options for customisation.

The pack delivers two sleek silhouettes with high levels of functionality. Two shapes that are ready to deal with anything that the winter months has to throw at them, whilst still maintaining their street ready style.

Limited to only 500 pairs, the size? x Reebok ‘Black Winter’ Pack will be available exclusively at size? from 8:00am on the 17th of October (Friday). 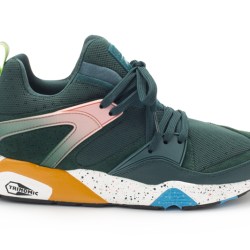 Following lasts months ‘Sahara’ and ‘Inner City’ releases from the Wilderness Pack’s first drop, PUMA and Size? return to give two more silhouettes a re-work inspired by the harsh terrain of the jungle and the mountains.

The popular Blaze of Glory model takes cues from the Amazonian Jungle as it pays homage to the dense, overgrown forestation and its inhabitants. The forest green mesh, suede and rubbery leather mix upper sits on top of a speckled midsole and is finished with bright pink heel wrap detailing designed to warn off predators. With the forests humidity in mind, the shoe provides breathability, as well as sheltering the foot from downpours.

The Disc-Blaze is designed for endurance and durability, built to tackle harsh mountainous conditions. Again the speckled midsole is applied, whilst the upper is made from a heavy wax canvas, and includes an ice green cage unit and brown outer sole.