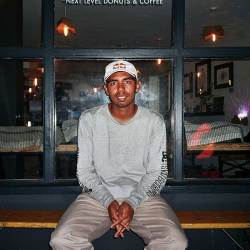 Brazil has long been responsible for producing some of the most exciting names in world skateboarding, a region known for its carnival vibes and happy people, it has offered up unique styles from hugely passionate skateboarders. Thaynan Costa is a name that falls in to that category. His life has centred around his progression in skateboarding, moving to Portugal at an early age and eventually to the European skateboarding mecca of Barcelona, where his experience would see him go on to win various comps across the globe. Renowned for his positive outlook and super loose but precise style, which is highlighted in Enjoi’s ‘Oververt’ and DC’s ‘De La Calle/Da Rua’, it was a treat to witness him tear up our local park and a pleasure catching up with him in person. We managed to grab Thaynan at the end of DC’s Special Delivery II Tour demo at The Level for a quick chat on his views on social media, skating Macba and the 2020 Olympics… 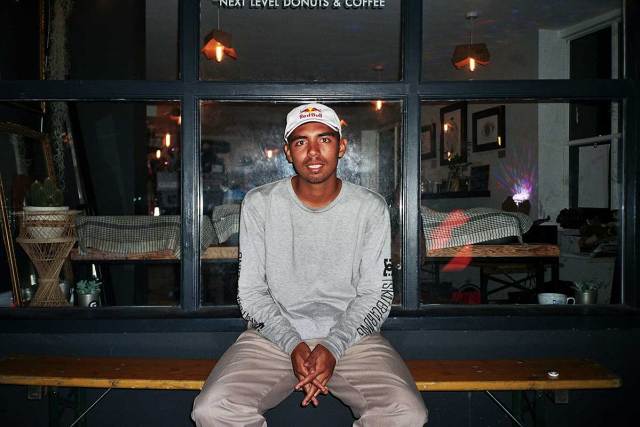 I’ve read before that you and Wes aren’t too concerned with promoting yourself through social media when it comes to skating. What do you think of social media as a whole?

It’s a good thing for sure, people can learn things. But it’s a bad thing too, people get too far in to it, ending up just filming everything for Instagram, or Facebook you know?

I mean, I like social media for sure, I’m on it a lot. But I’m not gonna be that guy that’s like trying for 3 hours for a trick just to upload to Instagram to get some likes. I don’t care about that.

You’re in to your photography though right?

What do you shoot on at the minute? Heard you like shooting film…

Yeah I like Polaroid for sure. I have an SX-70, its good, but I don’t shoot much on that because its so expensive. But when I have film, I shoot with that, or the Yashica Electro 35, I shoot with that quite a bit too.

You obviously travel a lot with skateboarding, what would you say is the most picturesque spot you’ve been to?

Ah I think, Patagonia. That was tight. There wasn’t soo much in terms of places to skate but it was a life experience for sure!

What would you says the best skate trip you’ve been on?

Maybe the first trip with Enjoi, we went to China and spent a month out there. I mean a month was probably a little bit too much but you skate a lot and not a lot else, we didn’t really party, we just skate go home and sleep. Pure skating, it was fun!

You’ve lived in Brazil, Portugal and now in Spain right?

Ah now I’m not tied to one place, I just keep moving.

I grew up in Brazil, I was born there and when I was 12/13 I moved to Portugal and lived there until I was 16 and then moved to Barcelona for a year and a half.

Where did you find the most beautiful women?

[Laughs] Ah I don’t know man. That questions a bit of a booby trap [laughs]

So you lived in Barca for a year, you skated Macba everyday, you must of seen some gnarly shit?

For sure, you see some very good skateboarding and crazy drunk guys just in general.

As someone who skates Macba everyday, off the top of your head whats the gnarliest bit of skateboarding you’ve seen happen?

Whats the craziest thing you’ve seen happen off the board?

One time I was skateboarding, I don’t know who the fuck this guy was, but theres like a plaza and fountain in the middle and this drunk guy just gets on top of the fountain and took his clothes off. The cops show up and he’s just like “Fuck You” to the cops. Eventually he jumps in the fountain from the top.

Yeah man, the next day he was back at Macba!

There are soo many Macba kids killing it right now. Out of all those killing it is there anyone you want to shout out?

For sure, fucking Pedro Attenborough he’s gnarly. Jose ‘Sixsas’ Diaz, he is so sick, for me he is the guy I’m most hyped about. A good friend and like a gnarly skater too, already. Both those guys are good kids too, look out for them.

Thing is I like trends, until they get too trendy you know? I like just like bumping up bumps, I was in London and was looking for some spots, I found like two. I found a bump to an electric box, and we skated this bump over a street that Nick Jensen switch flipped, that thing is fucked! When I got there I was like no way, someone switch flipped this!

It’s different for sure. When you skate Barcelona, its just like marble everywhere. I skate 48mm wheels and just had to push so hard. It’s always good times though.

Any trends in skateboarding you’re not hyped on right now?

Hmm, I don’t know. I like no comply’s, sex changes and all that. I just don’t like when people do that too much. People can do whatever they want to, but yeah sometimes its too much.

Damn I’ve never seen anyone do that! Snappy or Pressure?

That sounds mad! How about most overrated ?

Ah, right now, I think backside 360. Everyone is doing them, I like them, but everyones doing them.

Who would you say influences your style the most in skateboarding?

I always liked the older skaters, like Ray Barbee, I like Jason Dill, Jake Johnson for sure, Alex Olson, Mark Gonzalez, Van Wastell, all those guys are sick.

I know you’ve probably been asked this question loads. What’s your views on skateboarding in the Olympics?

For me, its there already it’s happening. I mean I’m not in to it, but I’m not a hater. If you want to go do it go do it. I see skateboarding as two sides, there are skateboarders who film parts and have fun, and then there are the competition guys who are athletes you know? They skate skateparks every day trying to focus on landing every trick perfectley like one after the other, boom boom boom. To me that’s just something else, that’s not really skateboarding.

Would you participate yourself?

Fair enough man. So what’s your plan for the rest of the trip?

So next we are heading to Bath then Bristol, and then the boys are going home and I’m heading to Budapest with the Enjoi guys and gonna stay there for a bit.