San Clemente and Boston unite, as Stance socks and New Balance present the first instalment of an ongoing collaborative series for 2017, dubbed ‘First of All’.

Comprised of two unique reworks of New Balance's 997 and 1978 silhouettes, the limited edition release sees Boston-based artist Matthew Zaremba and Southern California-based artist Mark Oblow add their artwork to the visuals to tell the story of the collaboration.

The Boston inspired 997 takes cues from the cities famed brownstone architecture with a copper rose and tan upper, detailed with a debossed 'cobblestone' pattern on the leather accents on the heel, and finished with a subtle reflective teal underlay to represent the patina copper often found on the buildings. The 997 have been paired with a Stance 144 Needle crew sock, constructed from a premium cotton and presented in a complimenting colour palette.

The 1978 arrives in a slate blue and tan pig suede on the upper, broken up with a stark white Vibram sole unit, to act as a nod to the famed beaches and surf breaks of San Clemente. Accompanying the shoe is another pair of the Stance 144 Needle crew sock, with added athletic stripes to align with the shoe rework.

Both pairs are Made in the USA styles and feature map graphics of their respective coasts on the sole inserts, as well as the coordinates of each area, which can be found in the welt cuff of the socks.

You can pick up both the 1978 and the 997 at selected retailers including END., Hanon and Footpatrol now. 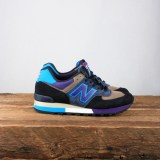 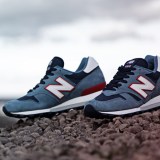 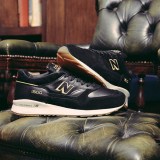 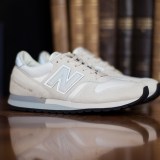