LA hip-hop collective Odd Future are teaming up with Vans for a collaborative footwear release this season inspired by some OG artwork.

Having worked with Odd Future's frontman Tyler the Creator on several renditions of the Golf Wang Old Skool in the past, Vans come together with Tyler once again to offer up a release which is representative of the collective as a whole and pays homage to one of the most eclectic hip-hop groups of modern times. Although the majority of the group have gone on to work on their individual projects, Odd Future are still as relevant as ever having played a key role in bringing American street-wear to a mainstream UK audience when they exploded onto the scene in 2011. It’s only fitting for them to be recognised and celebrated by a brand as well respected as vans.

The collection will feature the Vans Sk8-Hi and Authentic model, both of which dressed in a bright teal canvas on the upper which is covered with the classic Odd Future donut logo as an all over print. Launching in partnership with Live Nation, each pair from the collection will arrive in a custom designed solid shoebox and will be available at selected European retailers on the 24th of this month. For more information, head over to vans.co.uk 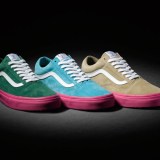 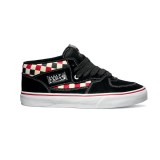 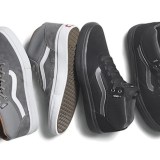