At the start of September we had some familiar faces from the DC squad roll through to share some summer vibes and put on a biblical display of skateboarding. One of the highlights was without a doubt getting a chance to have a chat with former SOTY, Wes Kremer. Our friends over at Glazed were kind enough to close the doors and provide donuts and trees to christen the interview, that by the end of which we were all truly glazed & confused. With a positive attitude, hilarious sense of humour and the best Madars Apse impression we’ve ever heard, Wes is one of the funniest people we’ve ever had the pleasure of talking to. This is the Wes Kremer interview… 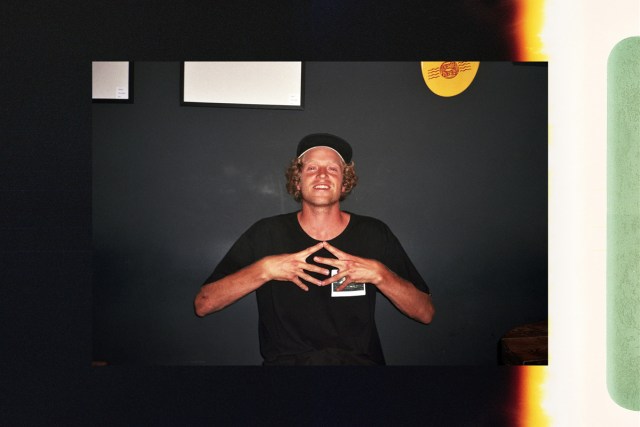 DC and your other sponsors seem to hook it up pretty good with all the places you’ve been to on trips.  Where do you reckon the true Mecca of skateboarding is after everything you’ve seen?

There’s multiple man for sure. I guess people would say the Mecca of Europe would of course be Macba, Barcelona. People from all over the world go there.

Every time definitely! Spain’s one of my favourite places to go for sure. Barca’s one of the world Meccas. Of course there’s LA, New York, San Francisco; California in general for sure.

And where’s your favourite spot?

San Diego for sure! It’s a good time you should come out and visit. I’ll definitely greet you with a donut and a spliff to return the favour! [Laughs]

On a deeper note what do you think about skateboarding and the mainstream with the corporate giants dipping their fingers in skateboarding today?

I guess it’s just the way the world turns. Skating’s escalated to this point so it’s inevitable. I’m not a big fan of it because you’ve got the major corporations taking a lot of money from skating and that’s just pushing out the smaller brands. I guess we need to get more skaters against the corporations. It’s fucked because they have the money to get their shit out there and people who already recognise them from whatever previous sports just assume it’s the best shit you know? It’s gotta go back to the millennium era when people were like “Aw D3s they’re the best”. Somehow those went insanely mainstream you know what I mean? Es, Etnies, Osiris, Circa; they were all skate companies ruling the mainstream market for a while.

They used to drop some insane colourways back in the day.

Yeah the Muska’s dude! The Muska’s were goin’ off for sure! 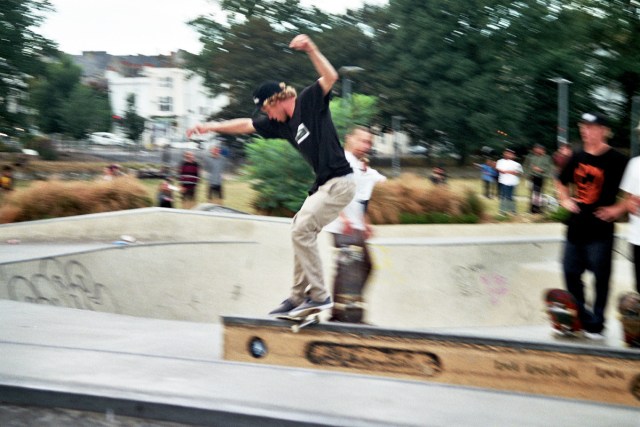 Didn’t G-shock fly you and a pretty strong squad to Tokyo a few years back?

Yeah it was an epic experience; most insane contest I’ve ever been to. Skateboarding, BMX, BMX freestyle and breakdancing. There was pretty much this giant arena, all this crazy music; it was so fun.

Did you get a load of free G-shock shit?

Yeah I got 2 watches because they flew me out two years in a row!

Serious question though… Does wearing a G-shock make you better at skateboarding?

[Laughs] 100 percent man you’re never late! That was the one downside about the contest cause you had to wear a watch. You had to wear this fat G-shock while you skated. I definitely slammed on it a couple times n’ scratched it up.

You’ve made it clear in plenty of other interviews that you’re not huge on promoting yourself and your skating through social media. Beyond skateboarding what do you think about social media as a whole? Do you think it’s a good thing for people?

I guess with everything you’ve got to look at both sides. It’s good for certain things like if you wanna share a photo or something funny you’re stoked on with your friends; but now it’s past personal and onto popularity dude. It’s a popularity contest more or less. People are looking for followers, looking for likes. What turned me off of it was seeing all my friends fully engaged in their phone. Now as the years go by you see everyone in more or less most first world societies just on their phone. I was in South America last year cruisin’ around and I didn’t see anyone on their phone. They were just out in the streets kickin’ it, more down to talk n’ shit. Now you just see people walking into poles you know what I mean? [Laughs]. 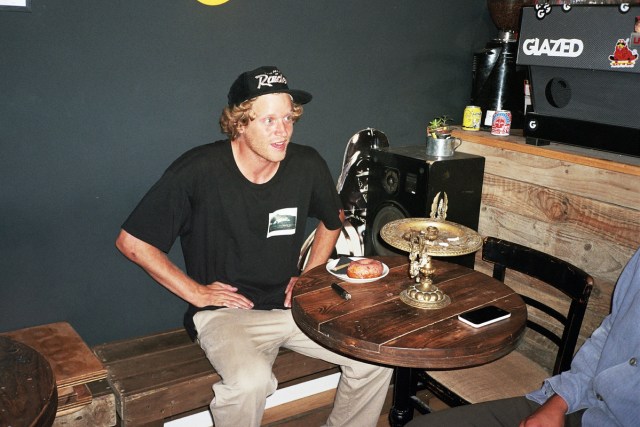 On a more chilled note. Most profound mushroom experience?

Oh Fuck. Pretty much any time with a good crew, some good music and a skateboard.

For sure just getting some fresh air n’ cruisin’ around. Everytime I think of mushrooms my mind just gets all spacey [laughs].

[Laughs] There’s too many man! Anytime you hang out with Madars it’s a new story.

Let’s see… Ok I’ve got a good one. So you guys know about Copenhagen?

Christiania’s like this hippy commune where you’re not allowed to take photos or film. We were there right when Madars first started filming for Mad World so he was just trying to get footage of everything [laughs]. We walk into Christiania [Laughs], fuckin’ Madars just boom pulls out his go pro, sticks out his arm just straight filming into the pushers street where all the weed and hash dens are. He went in full go pro like, “Hello!” [laughs]. This dude ran up on him telling him to stop, grabbed his camera saying he’d smash it. The homies were just trying to tell him to just take the memory card and luckily he just swooped the card n’ was out. It was one of those you know? Right when he pulled out the camera I was like, “Dude what’re you doing? Put that away”. Madarse was just like, “Nah come on man that shit’s ok!” [laughs]

How’d you take the news about Billy Chusta leaving DC for Nike?

You got a good Billy Chust moment you can share with us?

We made a good rap about him [laughs]. I don’t know it’s kinda good to have him on trips because you know at night sometimes they’re trying to light stuff up to film when we weren’t skating; so he’d just go skate and we’d just smoke joints n’ talk shit more or less. It was sick [laughs]. But a good moment? Fuck I don’t know he’s a bum [laughs]. Probably just the fact that we made a rap about him and showed him.

Was he hating on it?

Yeah for sure. It was a good time [laughs].

Who in the mafia squad rolls the biggest warhead?

Let’s see… P kid rolls a proper banger, Surrey definitely manages many a banger, JP the stee holds it down.  Xavier holds it down with the hash.

You’ve got all sides pretty covered then.

Who’s the biggest Casanova you’ve ever been on a trip with?

Like who’s the player on trips?  In a good way!

Oh fuck! In a good way?! Miller’s a player, Kev’s a player. We’re all players! [laughs] 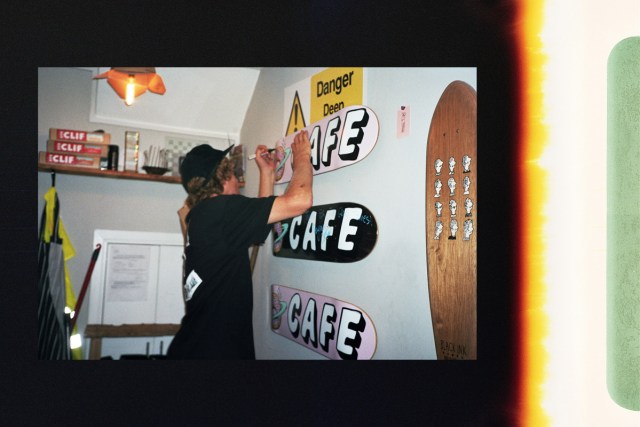 Who’s the mastermind behind the ‘Wes we can’ campaign?

Pretty much the art directors over at DC wanted to do a commercial for when I was coming out with the shoe so they wanted to go with the presidential campaign candidate shit.

Were you hyped on it?

Yeah for sure! They kind of did something similar with the last shoe with the ‘yes on Wes’. Was that it or? I can’t remember [laughs].

How do you find it skating over here?

Oh its’ fuckin’ good man. There’re some rugged spots but you guys hold it down tough as fuck. You’ve got a sick park here too, the Brighton park’s dope.

For more from the DC Special Delivery Tour II, head over to www.dcshoes-uk.co.uk

A huge thanks to the good guys at Glazed for hooking us up!

Four Wheels Issue #3
Catching up with Joe Lauder of Satta 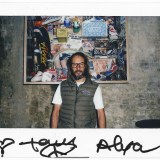