Two skateboarding institutions from either side of the pond come together this month to celebrate two huge landmark anniversaries with a concise collaborative footwear release.

As Slam turn 30 this year and Vans reach their half century, it's a time to reflect on past achievements and celebrate their contribution towards the community and pushing skateboarding forwards. It seems only right that Slam come together with their longest standing footwear partnership to mark the occasion and have done so with two unique reworks of the classic Lampin and Native models.  Both models have significance to key moments in the London skate stores history, with the Native released back in 1988, around the time that Slam first opened and the Lampin back in 1993, which was an important time in skateboarding for the store.

To match the rigours of skateboarding, the reworked Lampin and Native arrive in pro form, updated with Vans' signature pro skate technologies including the Ultracush insoles and Durcap vamp in the construction. Each style also features a classic Slam quote from Tod Swank on the printed insole and retro Slam artwork by Edwin Pouncy (Savage Pencil) detailed on the heel and ankle of the respective styles.

Accompanying the release, Slam teamed up with Mark Jackson on a short promo video featuring David Atkinson who explains the design process and the inspiration behind the release, as well as Slam family Oscar Oneim, Tom Tanner and Vans team rider Denis Lynn who test out the shoes in the streets of London. 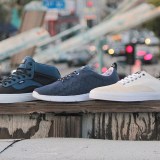 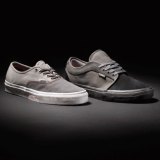 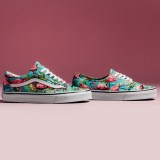 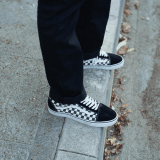