Last Thursday, Perth natives Butter Goods released their latest clip dubbed “Quartet” with long time collaborator Josh Roberts. The clip follows team riders Casey Foley, Ben Gore, Alex Campbell, Philly Santosuosso, and friends of the brand – Nick Boserio, Ryan Barlow, Evan Kinori, Zach Chamberlin and Brian Delatorre, as they meet up in the US to hit spots in San Fran, including the legendary EMB, and also through to LA. Following the video’s release we caught up with team rider and photographer Casey Foley to find out a bit more on what went down on the trip…

How long were you out in the states for?

I think it was only 13 or 14 days? We all work full time and Alex was about to have his 3rd kid, so we couldn’t stay that long unfortunatley. Im ready to go back!!!

How does the skating in San Fran and LA compare to Perth?

Im actually from Melbourne but I found it quite similar. I like being on foot when i’m out skating so San Francisco was really good for that. In LA, we pretty much just explored the neighbourhoods of West Hollywood so there was no typical ‘stuck in LA traffic’ scenario which was dope.

Aside from the opener at EMB, there’s a lot of unseen San Fran spots in the video. Did Ben Gore and Philly Santosuosso keep a few spots up their sleeves for this one?

I think Ben may have had a few ideas here and there, but for the most part nothing was planned at all. We would just organise an area to meet up and skate everywhere from there. Locals like Brian Delatorre, Ryan Barlow, Evan Kinori, Richard Hart and Zach Chamberlin were awesome to have around. We would have probably been lost without them. Haha.

Did you feel any added pressure when filming with Super 8?

Oh of course. That shit costs money! Haha. It all worked out tho. Josh killed it with all the Super 8 stuff.

Are there any spots or tricks that stood out in particular?

Philly Santosuosso riding a skateboard in general was the main stand out for me, his whole section was filmed in two days. He couldn’t get time off work to come to San Francisco so he only went to LA. Straight up G that boy!

As for spots, EMB was my favourite. Its was just awesome to skate at a spot that has so much history behind it. Plus my favourite skater is Henry Sanchez haha!

Who was partying the hardest on the trip?

To be honest, we were all way to excited to skate everyday, so we didn’t really party at all. I mean, we would drink every night but yeah. Oh except for Nick Boserios pro party. That was a good time. I slapped a BUTTER sticker on Forests Edwards board which was pretty funny. Ben Gore was a fucking animal that night man haha.

Any stand out moments?

Hahah, Philly Santosuosso buying Keith Hufnagel and his lady friend cupcakes was amazing. We were all leaving this restaurant and we seen Huf and his Mrs having dinner, and Philly’s like “Yo man, Im gonna get them some desert… I gotta get them some cupcakes dude”. I guess it was to show his appreciation for Huf’s contribution to skateboarding or something… Fuck it was funny though.

Also, meeting and skating with the legendary Matt Field was awesome. He’s such a nice dude and listening to stories of his professional skateboarding career was too good!

What’s up next for the Butter Goods team?

Not sure man. The team has expanded even more now, with Mike Arnold in the UK and Taylor Nawrocki in New York, so perhaps we will meet those dudes. I would love to see all the overseas team riders come to Australia this time!

Check out this awesome photo series from the trip, featuring imagery and comments from Garth Mariano and Casey Foley… 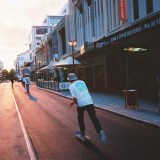 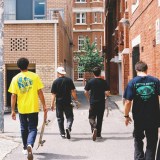 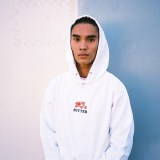